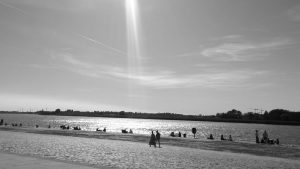 Why I live in Antwerp? Let us be honest: Antwerp is a small village with metropolitan allures. It is a stone’s throw from Brussels, the capital of Europe, and Amsterdam, Paris, London and Berlin are just hours away. So it is centrally located. Yet those are not the main reasons why I chose Antwerp at the time. That is because of the Scheldt.

Ah, the Scheldt. Every time I stand or sit on this wavy lifeline, I feel connected to the whole world. It is only water that separates us, is what I often think. But there is more. When I stick my nose in the air, it is as if I can smell all kinds of smells. And so it also works with sounds and colours. Beneath my feet may be the remains of many now lost civilisations, here on the Scheldt, in this and the higher layers of air, resides both the present and the future.

When, as a child, I repeatedly left my body during my near-death experiences/visions, I moved at a rhythm that was connected to the same rhythm of the Scheldt. While I ascended very slowly, the view beneath me expanded more and more. I was able to overlook my hometown in its entirety, but before the same happened to the bigger city of Hasselt, my flight, or rather ascension, was already heading in the direction of Antwerp. I often ‘stuck around’ there for a while and could see Brussels and Antwerp, Paris and Amsterdam. The Scheldt, with all its branches, is still clear to me as well. Berlin was diagonally behind me and in the dark. London lay to my right behind a kind of water border and was therefore invisible. So many years later I realise all too well that the water boundary was/is off course the North Sea, which in turn leads to the Atlantic Ocean.

Nowadays, when I travel in Spirit to certain places, I still follow more or less the same path as I did then. The difference is that I now live closer to the Scheldt and am much faster on the main highway that connects the North with the South. You see, in the higher dimensions, there are roads as well and they all lead to ever larger highways.

You have probably already heard of the latitudes and longitudes. After all, together they give a geographical position indication. That these lines, this raster, in fact goes back to leylines, the crystalline grid and the ancient concept of Axis Mundi (Latin: axis of the world or world axis) is much less well known to a wider public.

The world axis is a central connecting line that runs between the visible and the invisible, between the world and the celestial atmosphere or spheres. It is the central line that everything revolves around, both literally and figuratively. For example, if you come from the higher dimensions and from outside the Earth, you will see this axis of the world as a piece of ‘rope’ of an infinitely long rope that connects the Earth with so many other ‘Earths’. As if the Earth is a pearl in a cosmic bead necklace. In addition, the Axis Mundi will also be seen as the main entrance to our planet.

Those who wish to travel from the Earth in the higher dimensions, but do not wish to leave the Earth completely, will also orient themselves to the axis of the world and make use of all its branches. The image that best shows and explains this fact is that of the Tree of Life (Yggdrasil) whose trunk represents the axis of the world. A slightly more modern representation is the ‘aesculaap’, the staff of Asklepias, and the similar caduceus. The staff is the axis itself and the snake symbol or snakes are the accompanying guards to and from the other world.

The tantric yoga then provides us with the inner replica of this. The kundalini is a path along the spinal column along which the primal force, symbolised as a snake, must rise up to the main chakra to reach enlightenment.

Those who know how to tune their internal and external constitutions, or have mastered this art, travel as Initiates on the world axis to bring forth knowledge and power of the other world. So the Axis Mundi is not just a connection but literally a connecting path for those who have mastered the technique to travel it.

The Axis Mundi is also often symbolised as a rope to the sky, or a ladder with steps (such as the Jacob’s ladder), a pillar, staff or narrow high column (obelisk).

In my opinion, it is significant that the term Axis Mundi appears in almost all cultures on Earth, but above all plays an explicit role in world cultures where shamanism and animism predominate: the oldest.

Contrary to what current science says, the oldest world cultures are not at all as primitive as they (want to) make it appear. On the contrary. The oldest cultures on this Earth show a much deeper insight into the interconnectedness of Heaven and Earth. An insight from which our present arrogant/ignorant society can still learn a lot. When I spoke of the Ancient Cosmic Knowledge in my previous blog, I was referring to this. I literally feel called to place my specific ‘weight’, my cosmic consciousness, into the world-scale in order to contribute to the raising of the collective consciousness on this beautiful planet.

I know I told you in the previous blog that I would be talking here about my first live performance on the 1st of December – a performance with no audience – but that will be for later.