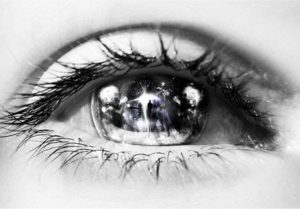 What I find so interesting about Kristien is that her own life took a completely new course with the birth of Amy. What’s so special about that, you might say, that happens to more women when they give birth to a second daughter. Of course it does.

Well, I can’t speak about it directly myself because I (consciously) don’t have a child(ren) and am not a mother, but I’ve been seeing it happening around me all my life. From a total blossoming to an outright depression or even physical injuries and just about everything in between. It is all possible. No woman really knows in advance what is in store for her and I have great respect for that leap into the unknown deep.

Kristien had no idea at all of the true scope of what was in store for her, and I have the feeling that she is still full of amazement and astonishment at what has happened to her and still happens to her on a daily basis. However, that has nothing to do with the fact that Amy was born, no, it’s because of who Amy is.

Amy is what is called nowadays in spiritual circles a ‘Crystal child’.* She has memories of her previous life and did not feel well after she appeared on Earth through Kristien and James, eight years ago. She struggled with all kinds of physical problems and had little life force to which regular medicine could not give answers, except to fill her up with all kinds of medication of which Amy became even sicker. Things went from bad to worse. Until one day a small miracle happened and Amy finally ended up in the right hands of an energetic osteopathe. She said that there was in fact nothing wrong with Amy. That she just had a lot to say and that she needed to be listened to carefully. From the moment she let her heart speak, things went fast. Before Kristien knew it she had a healthy and happy child.

Thanks to Amy, Kristien got to know a whole new world. A world so different that it literally turned her ‘ordinary’ world upside down. Amy is, as it were, an introductory package for Kristien. An initiation. The ‘Cosmic Push’ that brought Kristien’s heart and intellect into balance. And what a happiness, what a blessing, I am jubilant these days, this strong and remarkable woman grabbed that gift with both hands! I mean, I must not think about what would have happened if Kristien had not done this. Had she, like so many on this Earth, held up her blinders and stubbornly refused to listen to her heart. After all, the fact that she did manage to do so saved not only Amy’s life but also her own, and by extension so many others.

I know very well what I am talking about. I was/am like Amy. With the difference that I was born in 1973 and would therefore be an ‘Indigo child’. I also struggled with my transition to Earth and there were many nights when I left my body and didn’t want to return because my true Home wasn’t here but ‘there’….

For many of us, the first encounter with the higher spiritual worlds is usually through a certain experience. This can be a near-death experience (NDE), a mystical revelation (vision) or a vague feeling that one does not know how to bring home but that one follows intuitively.

In the coming months/years I will regularly publish a blog post with testimonials from people who speak frankly about their first encounter with something – let’s say – out of the ordinary. They will also talk about how that experience changed their lives. This is because I believe that these kinds of stories are still far too little told, although they are, in my view, among the most important stories of humanity.

I was once told by ‘the Ancients’ that you can always tell the degree of civilization by the nature of the stories that circulate. Stories are mirrors. For example, a society that – like ours – emphasizes sex and violence in its films, clearly still lives under lower chakra influences. Or at least tries to seduce the general public to do so. The same applies to a society which, on the one hand, has not yet solved the problem of world hunger but, on the other, suffers from huge food surpluses and promotes cooking programmes. These things create the illusion that the areas of the enlightened heart and head are not yet really in sight, although they are. Countless people all over the world are now saying ‘Hey, wait a minute, that’s enough. We have to take responsibility for our earthly condition and live differently – sustainably’.

That such an awareness is growing in the hearts and minds of humanity is no coincidence.It is part of a colossal Rescue Plan, minutely orchestrated by the united efforts of the Higher Selves of humanity and the entire Celestial Society. I realise that all of this – in the ears of our limited comprehension – sounds rather pompous, but in reality these are only modest words to describe the immensity of the Higher Plan now in progress, or the amount of help we are receiving from the Higher Dimensions to assist us in fulfilling this Plan.

* According to other sources, the Crystal Children were incarnated from 1972 onwards. (I myself am from 1973 and would therefore be a Crystal Child.) Before that, from the 1950s onwards, we had the Indigo Children. Later we had the Rainbow Children (from 1994) and the Sun Children (from 2012). Whether Amy is a Crystal or Sun Child (and I am an Indigo or Crystal Child); the fact is that we are both New Age children. We are a kind of forerunners or pioneers who literally herald a New Golden Age.