It’s hard to say exactly when and how it all started. Perhaps the seed for this special project already lay in our very first acquaintance, now about 6 years ago. 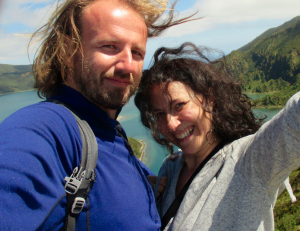 That afternoon I had deliberately skipped a birthday party in Park Middelheim, but in the evening I joined their company on the Mechels Square. Before we knew it, we were all sitting with a cocktail in our hands, staring at the tiny screen of a smartphone at my first video-clip. He – a director by profession – wouldn’t start talking about his big bookcase until a year later. After I had talked about my large collection of books. Yes, right from the start we played open cards. And we knew that if we went on this love adventure, we would end up in a stream that would greatly broaden both our horizons.

Our first real collaboration came at my request. If he wanted to make a video-clip for my third single ‘The Life’. He agreed and the result was a warm, penetrating portrait in black and white. We had been together for a couple of years. In 2019 I visited him several times in Burkina Faso/Africa where he tried to visualize the consequences of desertification and I tried to make myself useful as his invisible personal assistant. Not easy because the missions to the remote areas had sometimes never seen a white woman before.

How adventurous, but also how confronting and instructive our being together was and is. Next to so much other beauty is he the one who brought me back to my Africa, my old cradle. And I , I unlock for him certain, non-visible worlds.

Was it during our trips to Africa, Sri Lanka or the Azores? Or was it afterwards, during that first lockdown that immersed our lovenest in Antwerp in that special atmosphere? The fact is that my first lecture tour was canceled and instead I started working on articles and the English translation of my second book ‘Dear Heaven’. Thomas, for his part, dreamt out loud about some projects that had come close to his heart. I sensed that this combination would change my life for the umpteenth time, but I deliberately left the details vague. After all, that is how I have always liked it. Except when sharpness is called or explicitly asked for, I do like some concealment. After all, that is how the world is. Some areas are tangible. Others are vulnerable, fleeting, almost unnoticeable. Much of our most important work takes place in the latter areas. An influence, beyond the physical reach of man, but therefore no less important.

On July 6 Kristien contacted me for the first time. That she had enjoyed one of my writings so much. And that she had a little daughter in which she recognized a lot of me. The conversation went up and down until one evening it was clearly expressed for the first time: ‘Was this our chance for a project of the two of us? Our first really big collaboration?’ Too many coincidences all pointed in the same direction and on August 18, the family gave her green light. While the world around us was under the spell of a (fear) virus, ‘Project Amy: Back to Paradise’ started without making a sound…

This blog is part of the documentary film project ‘Back to Paradise’.

In the next blog post I will share the article I referred to above as ‘one of my writings’.

If you give me credit: sharing is allowed & more then welcome!