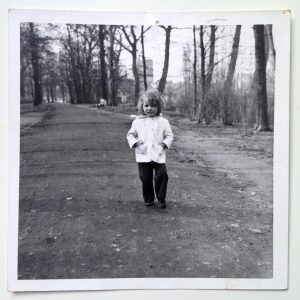 Although Thomas and I have been working on this new documentary for a couple of months now and a few testimonials have appeared in the meantime, you still don’t know why we started this filmproject in the first place. I mean: what exactly is the motivation for us as filmmakers? In short: what’s so special about Amy? To answer this question, I must take you back to my own childhood. Because that is where it all started.

My childhood. I remember it as if it were yesterday. That small room under the attic overlooking the main road… When I was tucked up in my bed at night, under the freshly laundered and starched snow-white sheets on which my mother had embroidered coloured flowers, very often exactly the same things happened to me as they happened to many other children. It usually started with the creaking of the sheets. I couldn’t turn around or the creaking made an infernal noise. On top of that, there was the sound of my own breathing. Breathing in and out inaudibly was something I almost never managed to do. Not in this initial phase of the evening. It was terrible! And it became even worse when I literally began to lose myself in this…

Whenever I failed to silence my physical senses, it seemed as if they only allowed more sounds. As if my physical ears were expanding more and more. Things I could not possibly hear seemed to come more and more into my hearing range. Didn’t I hear the rustling of… ? Didn’t that sound like…? I could have sworn that… ? Not only did my hearing field seem to be expanding; my sight too. My physical eyes suddenly appeared to consist of countless eyes. Later, I would use the term ‘facet-eyes’ for this. Now I was much too young for that. Barely five years old…

In the corner of my eye I saw things moving. At first it was a kind of ‘shadow discolouration’. Then ‘movements of energetic bodies’. It was not long before I spoke of ‘presences’. There was ‘something’ in this big house. Something that could not leave. Something that stuck to the walls and was sucked in. Something that floated into my room at night. Afterwards it turned out that someone had actually died in our house. Sometimes we were all sitting at the table eating dinner and we all heard someone going up the stairs very slowly.

Now that I think about it… In our little family it was not strange to talk about this. Stories about such things were somehow quite common. Maybe it was because I was born when my parents already had a certain age. They were older then the parents of the children in my class. Their generation had lived through the Second World War and had had to take shelter in the canals from falling bombs. In my parents’ time, people were much closer to nature and everyone knew someone who had had an extraordinary experience. My mother was such a person. She knew in advance when someone would come to visit and often made other correct predictions too. Even if and when someone would die. As a child, I loved these stories because they fitted in nicely with my own world view, which was fairy-tale-like, magical and challengingly adventurous.

One of the stories I loved to hear my mother tell was about how my father bought our outhouse. ‘It was suddenly like coming home. I immediately ran to a certain spot and started gathering wood there and breaking it into smaller pieces. It was as if I had never done anything else in that place.’

As opposed to the charming outhouse, I did not like our parental home and that did not improve over the years. It was an old dark mansion with high ceilings and wooden panelling, secret doors, many stairs and a large basement with a never-ending corridor. There was too much past. Too many energies that became almost tangible above my head at night. I couldn’t breathe. And perhaps my room was too small. In short: I felt trapped and wanted to get out. I wanted to be free and to be able to breathe with relief. The fact that this actually happened almost every night in a way that I could never have imagined… changed my life so profoundly… that years later I still can’t shut up about it. (See my personal testimonies in both of my books.)

What happened to me had everything to do with an expanded consciousness; with ‘feeling’ and ‘seeing’ beings of other worlds / realms. These beings are mostly afraid of the unknown and dark place they’ve entered and do not dare to pass the gate(keeper) who grants them access to the higher worlds of Light. Therefore those beings are just hanging around, waiting… In many cases they seek to approach people, but if these people are not aware of this, if they are not ‘sensitive’ to it and therefore do not see it, it can be pretty tough… for the ‘spirit’ in question but also for the other person to whom the spirit feels attracted.

In the beginning I was afraid of such spirits and didn’t know how to deal with them. Then I got up several times at night or crawled into bed with my parents. Only when I myself had learned a great deal about the higher Light worlds, I taught such spirits that they should not fear the gate(keeper) and then I sometimes guided them into the Light myself.

Nowadays, I don’t do that any more. I have given a kind of order and installed a mechanism that works like an automatic system. Every spirit that approaches me now because it is afraid of the gate(guard), is automatically guided to the Light. I don’t even have to do anything for that now. It works a bit like a computer that is giving a certain command. And it takes a lot of work away from me which is very nice nowadays.

Let’s go back to Amy now. Amy feels surrounded by spirits too and is currently actively working on being able to sleep through the night. In the early morning she likes to knock softly on the wall by her bed. When her mother hears her knocking and answers it, Amy gets up and sneaks to her parents’ room where she snuggles up warmly in bed. ‘I’m still a bit too young to do it all by myself,’ she says, ‘but one day soon I will.’

I nod. I have every confidence that she will do it brilliantly. This little girl of eight has won my heart from the first moment I met her and started talking about the upper world, her parents and her sister who she had to leave behind when she came to Earth. Remembering my own farewell to my home planet, tears came to my eyes and the lump in my throat made it difficult to swallow.

Then I understood. You see, in a way, Amy is me. She is, like Thomas says: ‘a little Ilske’.

P.S Amy (Angel Kgwedi) now has her own Facebook page! If you want to like/follow it, click here.