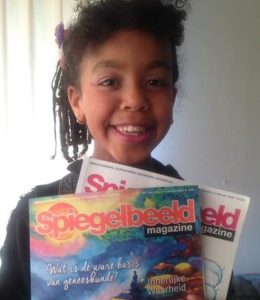 From April 1, the following piece can also be read as a column in the spiritual magazine of La Verna (only for subscribers)

Dear people, I write to you from a deeply experienced, yes, even consecrated silence: I can hardly call it anything else. When the enormous energetic influx – we could even speak of real energetic storms! – which was caused by the Aquarius gate during the month of February 2022* – calmed down, I once again shared in an intense peace which automatically stimulated me to withdraw, reflect and cleanse. Coincidentally (not so), just before that both my performances for the Momu/Antwerp and Opera Ballet Vlaanderen/La Bohème came to an end. It is very nice when inside you feel that your activities flow organically and connect to a much larger stream, that of life itself.

The Great Flow of Life is also called the Great Breath. Inhaling then equals low tide: retreating into the inner world or folding back on oneself. A time that stands for self-reflection, insights and necessary cleansing. Just as rain is followed by sunshine, an organic period of flooding follows the ebbing of the tide. Then you come out purified and with renewed strength and you are much more socially and actively involved in the outside world.

In a very concrete way, for me, all this meant several weeks of little or no social media. It took no effort at all. I watched myself, as it were, and noted that all of this was not for me for a while. I was also curious about how long this period would last. Imagine, so it popped into my head once, that I would never again take part in that steady stream of messages and information…. But barely a second later I had to smile to myself. After all, from experience I have known for longer than today that things come and go and that this was yet another one of those ‘phases’. I would probably come out of it purified. Or at least as if after a journey, with new energy. That is to say, if you don’t really make the effort to become really still and listen to what Source in you has to say to you, of course nothing will happen. If you become very still and do listen to those deepest whispers of the Soul, then you feel that you are taking small steps. And many small steps…

Something else that took place was that Thomas and I were finally able to arrange our actual relocation. After months of forced camping among only our plants (we slept on a mattress on the floor and our dining table consisted of a wooden bookshelf on two trestles), there was finally time to gather our belongings and round up our friends. As much as we had done our best to keep only the most necessary things, after the move we found that we actually still had far too many possessions. For more than half a year we had lived with almost nothing and we were actually very happy with that. (What is the use of having all kinds of collections?) What followed was a kind of second relocation where we once again went through all the boxes and a lot flew out of the house again! Many nice little things that we just put out on the street were sometimes gone after only a few minutes. One time I saw a group of little boys and one of them went crazy after spotting the wooden panel with the world map on it.

And somewhere in between all that, we finally picked up where we left off with “our” Amy. For those who don’t know yet: for just over a year now, Thomas (who is a director/cameraman) and I have been following a little girl who, like me, has very concrete memories of the time before she came here to Earth. What makes Amy completely special, however, is that she is barely 9 years old! When I look back at myself, at my own trajectory… It used to happen to me regularly that people stared at me or even laughed at me when I came up with my story. But by ‘before’ I mean ‘in the last 20 years’. In other words, I was already an adult. In my childhood, most children usually reacted with a pure, disarming innocence that is so typical of children. The adults, on the other hand… They called it, in short, an excess of fantasy. Or ‘Ilse has a very vivid/active imagination’. My mother – herself highly sensitive/mediumistic – only advised what her mother had advised her at the time: you’d better keep your mouth shut about this. People find it weird when you start talking about these things and will soon find you weird too… Well, if even your own mother says so… No, then Amy’s mother!

As I described in detail in one of my first blogposts, Kristien, Amy’s mother, had to go through quite a journey and it was finally thanks to an energetic osteopath that the pennies slowly began to fall. What Kristien did next, however, was truly sensational! She actually started to listen to her little daughter, which made Amy feel heard and seen. After that Amy not only blossomed more and more; she even became a kind of facilitator for not only her mother but for their entire family!

And the story only gets better because Amy now even has her own Facebook page where her followers are steadily growing. And nowadays she also has a regular column in the magazines Spiegelbeeld and Pure Child.

Of course I don’t want to point the finger at my own mother in any way – she only did what she felt she had to do at the time – but it may be clear that we have now entered a time (again) where extraordinary voices no longer need to be silenced! In other words, society has evolved tremendously in recent times. In the words of Kristien: ‘The demand/need from society to hear such stories of recognition is increasing. Parents also get much further in this world than in conventional medicine with their children who show problematic behavior or illnesses.’

Indeed. I sometimes twisted and turned myself as a child – and Amy also had a lot of trouble in the family in the beginning – but now I am personally and after a long (under)search completely ready for it! The world as it has been organized over the last few centuries is facing a series of profound changes. Wonderful is that! At last! The changes can already be seen. They are everywhere. In the skies above us, but also here, all around us on this beautiful planet Earth. At last the world is ready again for these kinds of voices and people. At last, these kinds of people and voices – because, of course, it is not just about us; there is gradually a growing movement that is now increasing in number daily! – are finding more and more of a hearing!

And there is more! My own story, that of the young Amy and young women like Christina von Dreien, show so many similarities that we can really speak of the (re)birth of a (re)new(ed) humanity and world view! The so-called naturalists of ‘modern’ science denied the soul because they thought that consciousness only originated from the working of the physical brain. But it is just the other way around! Consciousness and inspiration – Love and Light – are everywhere. Only then, when consciousness becomes aware of itself and becomes, as it were, a witness or an observer, only then does physical matter begin to interfere.

If you understand this, then you also understand what quantum physics is about (the most modern branch of science) and then you also realize that you yourself are your own Creator. Or a co-creator.

Did you feel the energy building again towards the full moon of March 18? And then to the equinox of March 20/21?

I wish you a beautiful and inspiring spring.

*I am not going to talk about the special numerology and the master numbers of the month February 2022 here. If you want to know more about that, then be sure to check out the Questions & Answers blog.